ROADMAP to progress toward the co-responsibily for the well-being of all and toward 2020, 2030 and 2050 international objectives
Fourth version
(Final version of CO-ACT project, integrating eht conclusions of all meetings, includind the Third International Meeting of the Terrritories of Coresponsibility)
Warning: Only the first part (presentation) has been translated into English. The other parts, in French, will be translated as soon as possible.

Origins of the road map

The roadmap to progress toward coresponsibility for the well-being of all today and tomorrow, proposed by TOGETHER network, results from a long process of co-construction involving citizens, civil society organisations, and local, regional and sometimes national public authorities from around 20 European and African countries.

This process, born out of the Council of Europe’s social cohesion strategy, was launched 10 years ago with the aim of promoting co-responsibility for the wellbeing of all, without exclusion or discrimination. It has led to the gradual construction of a shared methodological framework – SPIRAL – which is based on a definition of wellbeing for all that has come from citizens themselves. Currently, some 400 territories draw inspiration from this framework and help to develop it further. These areas are called ‘Territories of Co-responsibility’, and have been formally organised since 2013 within the TOGETHER network.

Since 2015, the scope of this process has broadened into identifying public policies which, according to citizens and local actors (both public and private), are necessary at various levels in order that co-responsibility and wellbeing for all can become a sustainable part of society. This policy identification was carried out within the framework of the CO-ACTE project, co-financed by the European Union’s Europe for Citizens programme.

The road map is the synthesis at the end of the project. It is a reference for TOGETHER network and its partners.

Why the road map?

In 2015, at the halfway point for the European Union’s 2020 goals, UN member states set themselves 17 sustainable development goals for 2030. At the same time, COP21 set ambitious targets for 2030 and 2050 relating to the reduction of greenhouse gas emissions in order to limit global warming, with the resulting Paris Agreement being signed by 177 countries. The texts relating to these various commitments recognise that being able to achieve these goals relies, above all, on the effective involvement of all stakeholders (both public and private) and citizens, requiring concerted action from a local to a global level.

Co-responsibility for the wellbeing of all, including future generations, seems to be the idea which best conveys this requirement for concerted action, and is a notion which can be easily spread and shared among a large number of actors and citizens.
see the definition of co-responsibility
Co-responsibility for the wellbeing of all including future generations refers to the shared feeling of responsibility among a community of humans on Planet Earth, without exclusion or discrimination, and the expression of this feeling in daily practices, on both an individual and collective level, as well as its systematic inclusion in the political, legal and socio-economic organisation of society (cf the TOGETHER Statute)

These practices highlight the considerable gains to be realised through a co-responsible approach:

In this way, co-responsibility is in itself a generator of social connections and wellbeing. The gains achieved through this approach are essential factors for meeting the internationally recognised objectives for 2020, 2030 and 2050.

Existing initiatives, however, are still limited and all too often isolated, frequently petering out without managing to implement co-responsibility for the wellbeing of all as a sustainable model and shared practice within society. There are many possible explanations for this situation, such as:

More than ever, there is a need to reconsider public policies in order that, aside form working to guarantee fundamental rights, they are devised as factors for facilitation and encouragement of co-responsibility and wellbeing for all.

To meet this need, the international network TOGETHER has, since 2015, been carrying out consultations with citizens, civil society organisations and public authorities. The conclusions that have been drawn from these consultations highlight the need to supplement representative democracy with other forms of democracy, which are essential for the promotion of co-responsibility for the wellbeing of all. When combined, the various forms of democracy can be the ingredients for true collective intelligence on the societal level. The conclusions were:

Implementing these conclusions should make political decisions more relevant, while also extending public action to the level of citizens and associations through various forms of partnership, volunteering, time exchanges, etc.

To refine these conclusions, a road map has been drawn up for the European and non-European level, launching an experimental process involving local, regional, national and European levels (and maybe even the global level), based on three complementary components:

The overall goal will be to identify, in the most consensual way possible, the forms of governance that seem best adapted to deal with the challenges that humanity will have to face over the course of this century, and to promote these among all interested stakeholders.

2- Methodological basis for implementing the Roadmap

CO-ACT products as tools for the roadmap

Fields to be explored in every component

Component 1 : Definition of the progress objective

Component 2: Identification and implementation of progress paths through experimentation

Component 3 : Integration of learnings in the society

3- Organising and implementing the roadmap 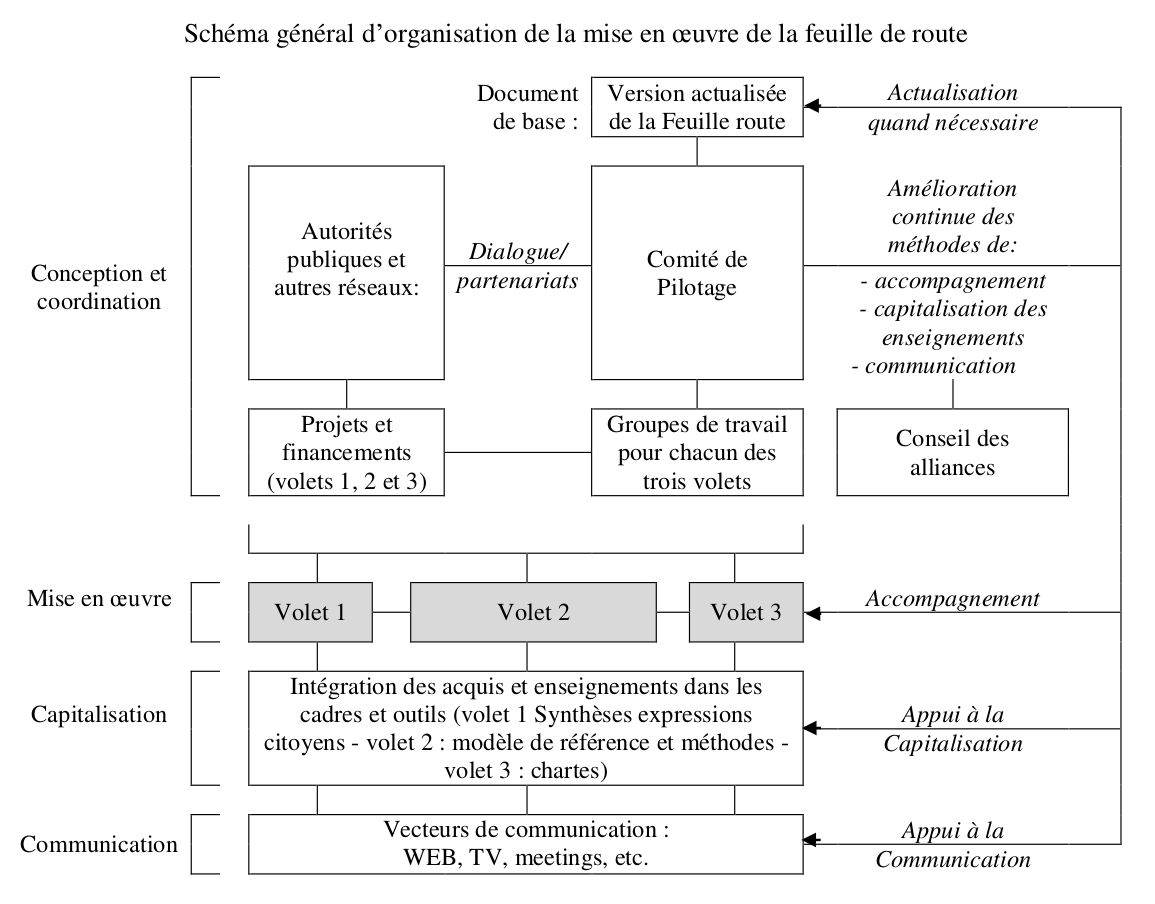 Missions of the Steering Committee

Back to CO-ACT project main page